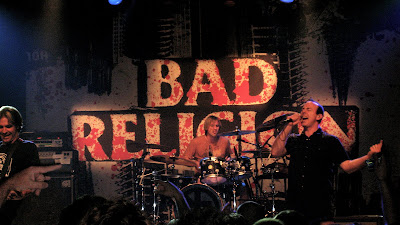 It’s hard to imagine a 15 year-old frontman Greg Graffin and his school friends deciding to form Bad Religion, the most epic, accomplished and inspiring punk rock bands. How could one envision such libertarian punk fantasies, or such immaculate hardcore harmony at such a tender and suggestible age?

The night kicked off with two nondescript screamo bands that sucked so badly that no more mention shall be made of them. It was a Sunday night, and the angry punks in the crowd kept chugging back more beer, checking the time, and impatiently pushing up closer to the front, waiting for the show to start. There was a definite sense of growing frustration; the Commodore’s decision to downsize drinks from bottles to plastic cups coupled with the fact that it was they worst night of the week in which to hammered was on everyone’s mind. Finally the legendary sextet walked onto the stage, and the body of the crowd converged to a dense square-shaped mass of excitement.

They started the show with a highly energized performance of “21st Century Digital Boy” originally recorded for their fifth album Against the Grain (1990). It’s likely one of the best songs to start out with, not just because it’s infectious and catchy, but we can all relate to Graffin’ lament that “I don’t know how to live/ But I got a lot of toys.” It also brings to mind all of our mothers strung out on valium, an sad image that is surprisingly “effectual.” Selecting from a wide range of singles, and some not-so-common tracks like “Anesthesia,” BR gave a fantastic set list that sampled from the whole 28-year span of their discography.

Three of the six band members on stage were the original founding members, and they were easily spotted. Graffin delivered a vibrant, defiant performance: his iconic finger-pointing and unrelenting stare gave him an edge to his philosophical rants. Arguing for a rejection of consumerist culture and social conformity, usually guys this age come across as being pedantic or just full of it. Even those more sensitive of loud, distorted music should venture into the lyrical world of BR. Songwriter Graffin holds a Ph.D., and his understanding of politics, injustice, and individual suffering is delivered with poetic integrity, and reinvents the idea of social responsibility through critical thinking and non-conformity.

Bass guitarist Jay Bentley seemed to have the most fun on our Vancouver stage. He jumped around and sweated the most profusely, smiling demonically like some intense, disturbing fat kid eyeing your DQ Parfait on the bus. Speaking of which, lead guitarist Brian Baker looked terribly overheated, unfit, and generally sagged instead of rising to the occasion. While performing the quintessential punk song “Come Join Us” off the 1996 album The Gray Race, Baker hogged the one fan the entire time. Come on, Brian.

Overall the show was pretty fantastic. They may be getting older, but better in the same way as a wine slowly ages to perfection. A punk wine, that is.