some of the weirdest stuff i’ve heard… 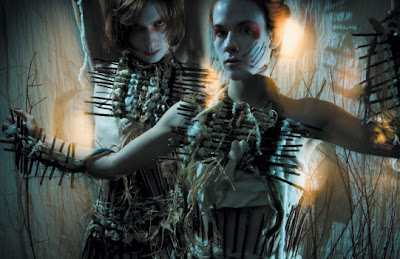 i don't think these children were ever breastfed

Yolk of the Golden Egg

Dandi Wind’s new album Yolk of the Golden Egg is a sonic journey that challenges every spectrum of electronica. Caught somewhere between a surreal utopic musical vision, and something that could only have been spawned from a ritualistic love orgy between Kate Bush, Bjork and Aphex Twin’s Richard D. James, the record shows no weaknesses. It opens with “The Battle of Verdun,” aptly catching the industrial bustle of its Quebec recording locale, and moves through what seems like a futuristic, cacophonic scene of torture. Raw, edgy and highly textured, the sounds take detours through the complexity of the psyche in a way that could be likened to the spiritual despair and disillusionment of Trent Reznor, but with more emphasis on a clear articulation of ugliness. Never failing to surprise, the song “Johatsu” sounds like a cracked-out late 80’s dance exercise tape, while suggesting the theme that would should all “surrender to the machine.” The album climaxes with the final track entitled “Dance of the Paralytic,” whose bass-rich beat is juxtaposed against an ineffable wet thumping noise that brings amniotic fluid to mind. While overtly corporeal, the album points at an introspective notion in quoting Dostoevsky and the parable of the old dreamer rummaging through his dreams in vain. While its message is not always accessible, Yolk of the Golden Egg is a worthwhile musical venture for those who want something a little more violent in spirit.