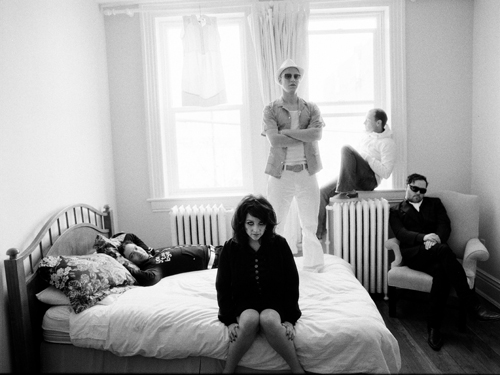 For anyone who’s listened to Stars’ 2004 album Set Yourself On Fire, it’s hard not to shed a tear for their beautiful, eloquent and heart-breaking indie pop. After a week in the craziness of the Olympic cultural hullabaloo, this show was like a much-needed sedative that lulled the attendees into a peaceful, thoughtful musical reverie—though not entirely replete in energy—with frontman Torquil Campbell balancing the melancholy with humour and frequent curse words.

Hey Rosetta! took the stage just as someone in the crowd screamed out “You are so cute,” an arguable reference to vocalist Tim Baker’s irresistible smirk. The band, originally from St. John’s, has progressed tremendously from their garage-rock sound to their performance which was lush and complex. Layered with Romesh Thavanathan’s cello and Erin Aurich’s violin, the string section added a sultry, soulful dimension to their indie rock trademark sound.

Stars’ performance, on the other hand, was something rather cathartic, as Amy Millan’s velvet voice can often inspire. Playing mostly from their 2004 singles, they sparked up the show with “Set Yourself on Fire,” then quickly went into “What I’m Trying To Say,” now the anthems for any romantic break up. Campbell, as the son of the two Shakespearean actors, waved his right hand quite a bit, which gave the lyrics a more dramatic, soliloquy-type quality. Between songs, he advised that if anybody shook his hand on the street, that they fail their drug test. Then seeming visibly embarrassed, Campbell quickly said “Don’t do drugs” in a way that was both cute and a complete lie.

The Montreal-based group indulged fans with a few new songs from their upcoming album. “Open” followed the Stars formula in that it was upbeat and catchy, but had less vocal harmonies in it. “Dead Hearts” was a spooky, lullaby-sounding tune that alluded to dead children Millan once knew. After three encores, the group finished off their set with “One More Night,” which Campbell said was about “fucking someone to death.”

Taking place at Vancouver’s historical Orpheum Theatre, a seated opera house with velvet cushions in the lobby and bartenders who called you “madame,” the show was certainly the best edition of the Cultural Olympiad to date.