there will be blood Paul Thomas Anderson’s newest film is a gritty tale of jealousy, greed and revenge, set at the turn of the twentieth century when the American oil industry was just beginning.

Daniel Day-Lewis plays Daniel Plainview, a self-made man who starts his own drilling company and eventually attains God-like status in the infancy of American capitalism. Plainview is a loosely based adaptation of oil tycoon Edward Doheny, and this oil man is extremely reminiscent of Count Dracula. Anderson creates a character with his heart set on a misanthropic vision – to escape the falsity of other human beings who only exist to stand in his way.

Indeed, Day-Lewis’ character has an Iago-like moral imperative and only seeks to gratify his selfish designs, abandoning his adopted son in pursuit of wealth. It recalls to mind the kind of men who make up the world; only with more blood and oil saturating this industrial, harsh aesthetic. 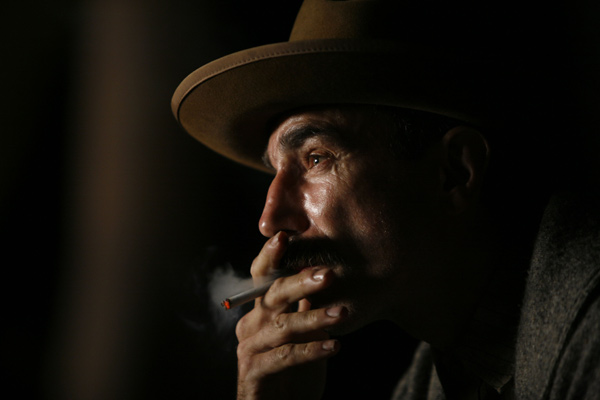 Paul Dano (Little Miss Sunshine) plays Eli Sunday, an evangelist priest whose family’s land is sold in order to facilitate more oil drilling and greedy profits. Dano represents the naive, predictable idealism of the most flamboyant sect of Christianity which ultimately fails in its pursuit to offer salvation to the ravenous souls lost in the oily abyss of the drilling plains. It’s a classic tale of gluttony and human vice versus the powers of the good; and predictably enough, the thirst for oil conquers all.

Some other of Anderson’s films include Magnolia (1999), Punch-Drunk Love (2002) and Boogie Nights (1997), and share the same compelling insights on the darker sides of human nature.