The first night of the 3-day Vancouver rock show took place at the Biltmore Cabaret. Two years ago this was probably the most depressing, dilapidated bar along the Kingsway corridor, but since the renovations, it has been hosting some of the hottest bands on the local music scene.

Twin Crystals started off the show with their huge, bombastic electro-heavy sounds.  The digital punk-rock trio hybrid are best described as the kind of band that crafts tunes catering to an ADD-riddled generation – fast, catchy, and loud as hell. Drummer Jordan Alexander pounded his set with a superhuman like determination, while frontman keyboardist Jesse Taylor repeatedly screamed “Go to sleep! Go to sleep!” before languishing in a pool of psychedelic, distorted sound waves. 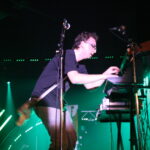 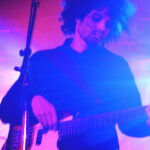 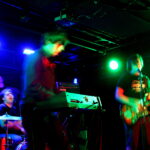 Sandwiched between two heavy acts, Said the Whale came on quickly and entreated the audience to a warm plethora of sounds that were both soothing and invigorating. Playing fresh tunes from their re-released album Taking Back Abalonia, the indie quintet brought a late summer glow to the show. Caught somewhere between the coolness of the Shins and the spiritual ferocity of Broken Social Scene, Said the Whale was the best act of the night.

Ladyhawk was the most anticipated act at the Biltmore, but afterwards there was a sense of disappointment. In the alleyway leaving the show one could overhear the conversations amongst the hipsters, one of whom was describing a Ladyhawk as “a huge plaid beardo  bro down.”

Day two was tremendously impressive. More flavour and variety of sounds were played at the gutted-out Storyeum basement in Gastown. Aside from being a bigger, newer space, the venue had two stages going on either side of the building which allowed for smooth set changes and less waiting time for the rest of us.

Prairie-raised Wendy McNeill played music for the heartbroken, using a variety of unusual instruments ranging from the accordion to tiny music boxes. McNeill’s free spirit filled the dark venue as she sang songs about deception and illusion, begging the audience with thoughtful, voyeuristic lyrics such as “tell me what it’s like/ when no one’s watching,” while polishing off her experimental indie folk sounds with the clear “ching” of a triangle.

Another memorable act of the evening was Pacifika, an alternative rhythmic latin group, that incorporates subtle undertones resonating from their acid jazz influences. Adding tremendous sensuality and softness to the blend, the trio combined dub, electronica and heavier beats while sweeping through the eclectic sounds of latin America over nylon-stringed guitars. Anchored by Toby Peter, a rather dominant bass player, singer Silvana Kane’s voluptuous voice added balance and feminine intimacy to the set list.

On the other hand, Woodhands‘ performance was blistering, deafening and amazing. With just two bodies on stage , the electro-pop duo filled the second stage space with relentless energy and impressive musicmanship.  Vocalist Dan Werb showed his mastery of two electric keyboards, synths and drum machines, while intermittently dancing around the stage without the slightest indication of fatigue. “Chocolate” Paul Banwatt drummed demonically, adding more depth and fervour to the huge electro, heart-thumping beats.

Despite its quasi-corporate sponsorship, Transmission succeeded as a celebration of independent and local Vancouver artists who decorate the music scene across the whole gambit of genres. From the high strung, teched out electro fiends, the plaid-sporting greaseballs, or the quiet bookish types, this three-day show had something for everyone.