Where The Wild Things Are

Children of divorce, loneliness and other magical things

It might be a children’s book, but this is no film for children. I walked into the movie theatre thinking it would make me feel like a child again, but instead I was presented with a familiar vision of childhood divorce, neglect and naivety, without the Freudian psychobabble.

Inspired by Maurice Sendak’s quintessential book, Where The Wild Things Are reminds us of what it’s like to be a lonely, confused albeit imaginative child. Through ten years in the making, the book’s ten sentences drawn from the alter-egos of innovative director Spike Jonze haven’t lead us to naught. 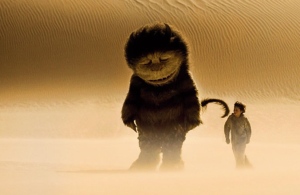 It’s been a while since Jonze showed us the dysfunction and authenticity-grabbing tendencies of the human mind, but Where The Wild Things Are shows off his greatest talent: it’s a convincing delivery of a more tender childhood experience sure to make most grown-ups weep. Like in Being John Malkovich, it’s a portal into the quirky mind and suggestive consciousness of the nine-year-old Max (Max Records), the universal only child, lover of forts and make-believe.

I read this book to death when I was a child. Most people under fifty have held the beloved story in their hands, heads and hearts. Max’s cheeky mischief leads his mother to banish him to his room, a familiar punishment we’ve all had. If you were an only child like Max and I, you’d have to come up with a way to entertain yourself. You’d never stray too far from home though, away from your mother’s blanketing love and the hot dinner waiting for you.

My parents separated in 1992 during the second highest peak in divorce records during the 20th century. It was more or less a statistical inevitability that it would be my family, aside from the fact that my parents didn’t get along anymore. I remember being whisked away by my mother. I didn’t rebel in the ordinary ways, by getting in trouble at school or acting out at home. Instead, I became the laziest eight-year-old child in the world. It was impossible to rouse me from my room or the little reading forts I made out of blankets in the den. Those covers blinded me from an outside world I didn’t understand, and helped muffle out the loud, operatic movements of my parents’ feuding. I don’t remember playing outside with many children, or even seeing the sky very often. That book was my medicine for loneliness.

Max is like that too. Who is this stranger kissing my mom in the living room? The rage and sense of betrayal carry through cinematically, intimately as Max peers cautiously over the door frame, shouldering the curiosity mingled with confusion. Like a lot of children of divorce, I saw very similar things, but didn’t understand them. Back into the reading fort I went.

A little bit of loneliness is good

When Judith (Catherine O’Hara) asks Max what the cure for loneliness is, his reply is both beautifully and simple, that “a little loneliness is good.”

The Jonzeian vision of this kind of childhood is powerful, because he side-steps the complexity of broken family life by diverting us to the realm of endless imagination. There’s a sadness and beauty in the way Max’s loneliness makes its way into his imagination. He’s in a place we’ve all been to, where your greatest defence was being bigger than anyone around you. After all, what greater fear was there than getting gobbled up by a monster?

Freud and other monsters

When Sendak’s book was published in 1964, a dumpster bin-sized amount of literature spewed out, upchucking explanations for the monsters as oversized, morality play characters, each representing a basic human emotion. Monster Carol (James Gandolfini) could easily be read as a transvestite with an insatiable sexual hunger, hence his voracious appetite for past kings. The asexuality of these creatures could be a Freudian buffet of psychoanalytic opinion. Enough is enough.

Jonze has no patience for this either, and the film manages to bypass the usual jargon of theory. He’s not showing us anything about children because we see them traumatized by the actions of their desperately lonely parents, but rather, the states of play Max delves into.

In the end, this film wasn’t so much about wanting to reconstruct the idea of childhood. Some Freudian theories might explain that as the crux of the book, as some digestible symbol for the fine line between fear, comfort and some deep-seated desire to gobble up your own mother. In reality, you just wanted her to pay more attention to you.

Check out the trailer. It should warm your heart.