you, you’re a history in rust… By hearing their ambient music, this seemingly nonsensical phrase can only be fully illuminated.

Despite shiny discoballs and incessant smoke machines perforating their otherwise introspective sound, Do Make Say Think delivered some of the most beautiful and transcendental sounds over the hollowed out venue.

Maybe it was the haze from the smoke generator, or perhaps it was the atmospheric red lighting that coated the walls and surfaces, but honestly this was the unlikiest spiritual experience in the middle of Vancouver downtown.

Despite their downtown Toronto urban origins, Do Make Say Think can reduce everything down to a gorgeous organic texture that makes you believe that music is a naturally occuring substance. Although their live shows have evolved into more calculated, tight arrangements and sets, Charles Spearin and Ohad Benchetrit entreated us to godlike euphonic improvisation between classic songs such as “The Landlord is Dead,” and “Auberge the Mouton Noir.” Indeed, with a concept so abstract, this group defies almost all typical musical conventions by seeming natural and uncalculated, but perfect in all the ways of beauty that are too incomprehensible to articulate. (Even their name reduces all of life in four words…) 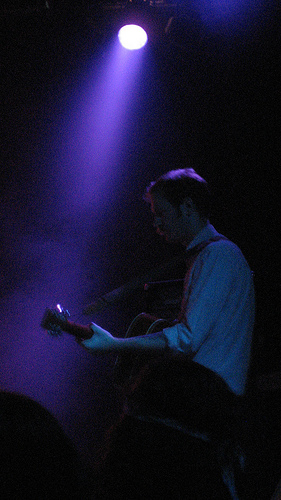 Well, I dunno. Maybe I’m just a sucker for vintage Gretsch guitars and strings and saxophones, but when you hear them all in perfect relation and proportion to another like that you’ve got to appreciate the fact that something far more significant is going on.

I didn’t take acid before doing this show, but in all honesty it felt like it. I still don’t really know what happened that night, but the new album creates synesthetic euphoria. Tracks like “The Universe!” and “Executionary Blues” point to that unusual, yet mundane beauty in the minute details of life that is often overlooked.