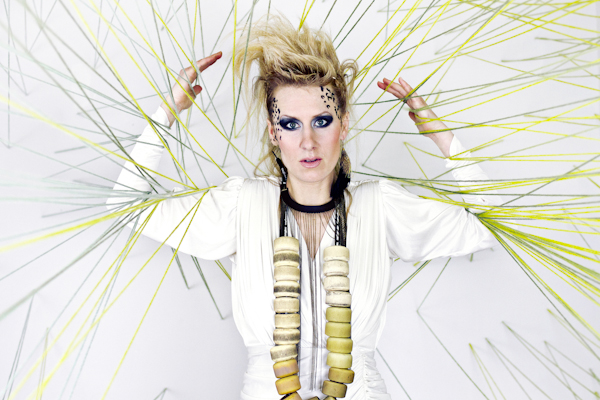 FOR THE POLYPHONIC PIXEL

prOphesy sun is a a multidisciplinary performance artist and musician who lives in East Vancouver. Her latest offering, Bird Curious, is a collection of songs that weave together elements of vocal improvisation, organic room noises and environmental vibrations to create emotive spaces, exploring the fleeting realm of the time. The kicker? It was recorded entirely on an iPhone. Over the past few years she’s built herself up as one of the main creatives of the vibrant East Side scene, performing with Tyranahorse, Spell and Her Jazz Noise Collective, to name a few. Haunting and surreal, Bird Curious was released May 1, 2012.

The Polyphonic Pixel: What made you decide to record your album on an iPhone?

prOphesy sun: First and foremost, music for me is immediate. In my art, my performance tends to be in the moment. Recording on the iPhone was just another style of working in the moment. I’ll have a tune in my head, and then I’ll just record it. For me, another reason why I chose to use this medium is that something that has that feeling of immediacy has limitations too – sometimes my phone will run out of memory space so I have to make room. Another thing is that if I’m biking, or hearing the rain falling, I can record the space I’m in. In the past I have used soundscapes from recordings with a hand recorder, to capture the space I was in at that moment in time.

PP: You’ve told people you tend to do things in “one go.” Why?

ps: I am an improvisor so it’s really in the moment; its just right there, it’s what comes out of me. There’s a vision in some ways, aspects of altering something, but it would lose some of its originality and I’m interested in the source of things. When I go with that emotion or feeling, it will take me somewhere.

PP: How do you feel about people describing your work? Do you feel like people are constantly missing the mark?

ps: It can be awkward or disconcerting sometimes. I feel lucky that anyone would listen to me because it’s a very personal practice that I’m sharing with the world. It’s interesting to hear people clarify things for me, like when I’m doing things in the moment, I have no sense of how it fits with things. It’s like a reality check. I come back down to reality and have others put it into everyday culture.

PP: Bird Curious is your third album. Were there events, ideas or things you felt especially inspired by?

ps: Things for me tend to run along three angles. I love serenades, in not only present and the past, but potential serenades where I could explore if I loved another person, and how I would love them. My second is a real fantasy; I start to push my limitations on what I feel what my voice can do, and how it can evolve. It’s cool to make sounds I had no idea I could make. Finally, I like being open to just being. I sometimes find where these sounds come from, that it’s like a meditative process. The sooner I work within something, I can transport it somewhere else, like fantasy reality, chaotic ethereal space where I can create a soundscape.

PP: Tell me about your music video, for “Moments Pass.”

ps: The music video was not done by myself; I worked with designer Kendra Patton. Her and I got together and I told her I was putting together some work. Her and I were in contact with another mutual friend who was renting space in an apartment building that was to be condemned a week later, so I lined up everything with one crew and used that same space for the video.

PP: Do you find your style of making music to shift, or change since your first album?

ps: I’m moving more into using text or words; in the past I was so focused on finding the melody but now that’s evolving a lot more into language. I’ve really focused on the voice. In my second album, I was shifting a lot between the instruments I work with: a broken harmonica, a kazoo and some broken electronics and sound samples. My first album used a lot more sound samples and my voice, but this album is really just my voice. The evolution of my music now is really about me really pushing my voice more and more, learning about how it’s an innate tool with endless possibilities.

Check out the music video for prOphesy sun’s “Moment’s pass”: